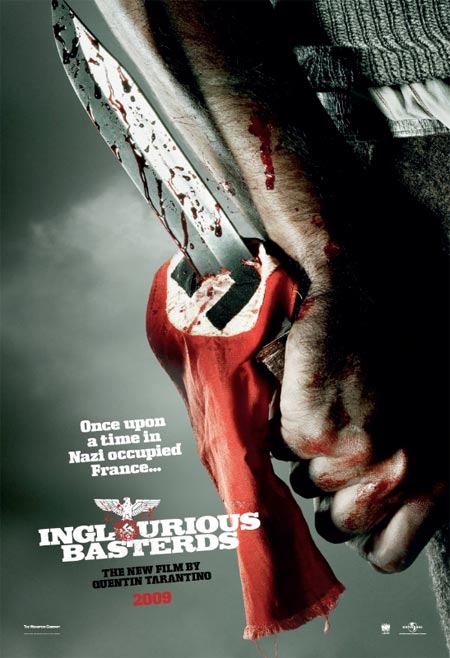 Have you noticed the slate of WWII resistance movies lately? There’s last year’s Valkyrie, starring Tom Cruise, which depicts the actual attempted plot devised by a cadre of senior German officers to assassinate Hitler. Earlier this year saw the release of Defiance, also based on a true story, with Daniel Craig and Liev Schriber portraying the Bielski brothers, who formed a Jewish resistance otryad in Nazi-occupied Eastern Europe and helped over 1,000 people survive in the Belorussian forest. Not to be outdone by American productions, Europe is getting in on its own action with the Danish film, Flame & Citron, which came out a few weeks ago, an ultra-stylized spy noir based, once again, on a true story of two resistance fighters, nicknamed, as one might expect, Flame and Citron, who became heroes of the underground through their violent dealings. And finally (or perhaps not?) there’s Inglourious Basterds, due out this Friday, starring Brad Pitt, and directed by Quentin Tarantino.

For the majority of onscreen depictions of WWII warfare, the script has been about specifically military combat (Saving Private Ryan, Band of Brothers, Flags of our Fathers, etc.) What’s striking about this current slew of films, however, is that the focus has shifted to stories of renegade insurgence. One could postulate all sorts of hypotheses about why that shift might have gained traction recently, but regardless, obviously there really were a lot of resistance movements going on during WWII, and there are a lot of incredible stories of heroism and courage to be told. Yet the particular cultural territory the Inglorious Basterds are invading I find rather dangerous and troubling.

Of all the recent resistance-themed movies, Basterds is the only one that does not appear to be based, as far as I can tell, on any sort of actual events, and from what I can gather from the movie’s trailer the whole premise basically just seems like an excuse for Tarantino, the Auteur of American Violence Porn to do a 1940’s period flick — altho, allegedly there is some sort of plot, also. After the trailer’s initial 50 seconds of banter, when we’re watching a Nazi getting his head glibly bashed in with that All-American weapon, the baseball bat, like it’s a Wiemar Goodfellas, it seems the huffing, gleaming black trend train, trailing more than a half century’s smoke behind it, might have arrived at its ultimate cinematic destination. Though not before — and this is perhaps reflective of what Tarantino does with his down time — video games got there first.

Wolfenstein, Call of Duty: World at War, Medal of Honor, Mortyr, ÜberSoldier, Commandos: Strike Force — these are all first-person shooter games (and doubtless there’s others I’m missing on this list) wherein players are, as Pitt puts it in the trailer, “in the killin’ Nazi bidness.” In fact, the the film is so seamlessly aligned with this game genre that much of the promotion for it is happening through online gamer destinations like IGN and GGL. Even the movie’s iconography might as well be for an Inglourious Basterds video game, (which, I’m sort of surprised it isn’t): 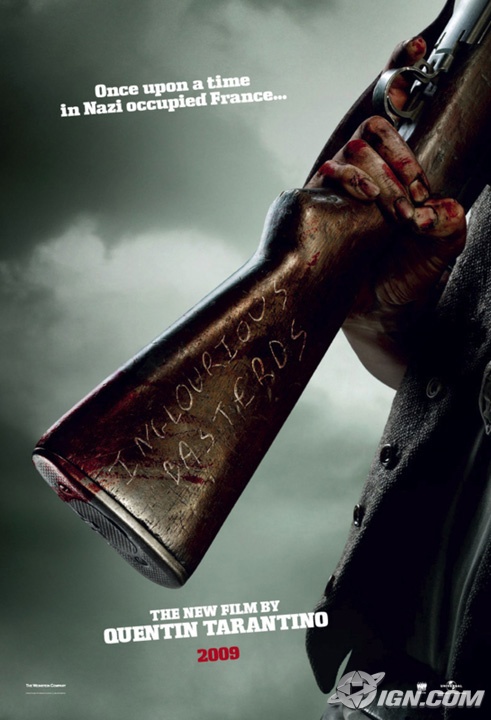 Not that I am against the killin’ Nazi bidness, it’s just that I find the progressive reduction of the Third Reich to a cartoon, to be rather tasteless — also, a little bit queasily horrifying.

65 years after the defeat of Nazi Germany, our concept of Nazisms seems to be losing its reality. More and more we are turning a cancerous pathology of human behavior into a fantasy of evil. Their atrocious actuality wiped away by time, Nazis have become almost too perfectly evil to be have been true. They have come to serve now as a broad cultural shorthand for the ultimate, rottenest badness, or otherwise, for just whatever we happen to find personally distasteful. (See: Bill O’reilly expounding in all seriousness on why the Huffington Post are a bunch of Nazis for an example of just how utterly degenerated the cultural understanding of the term’s meaning has become.) Nazis have evolved into mythical, timeless, uncomplaining boogiemen, always on call to play the supreme Hollywood villains or video game baddies now that the idea of Soviets as arch enemies is an anachronism and Arab villains still feel way too real to be fantasy.

But there is a hugely real and present danger in treating Nazis like the occupied-Europe equivalent of Ninja adversaries in Revenge / Action flicks, or like human-looking-yet-conveniently-not human alien monsters. It is at our own peril that we think of the absolute, explicit worst that humanity is capable of doing, as if it were a supernatural, science-fiction evil, safely beyond human achievement. It’s very much not. Nazis are not Hollywood creations. They were REAL. And the fact of their existence is STILL real. And there is no fantasy for any of us in forgetting.