We used to understand that brands were run by humans. But now, a decade in to social media, we are beginning to experience brands as human. And our technology is increasingly improving at executing the simulation.

In the future, it will have begun, like you knew it would, during the 2015 Super Bowl.

“The Coca-Cola Company spent a ridiculous sum of money during America’s No. 1 National Pastime on the evening’s most cynical advertising blitz: the “MakeItHappy” campaign,” Sam Biddle wrote on Gawker. “The premise was simple and also dumb: the internet is a mean place, and Coca-Cola was going to try make the internet a nice place. It was attempting to be the “I’d like to buy the world a Coke” for our modern digital idiot age: The company created a Twitter bot to take “mean” tweets and reformat their words into a cartoon rabbit playing the drums, or a cat. With this, the toxic web would be steam-cleaned, or something. So, in the hopes of making a minor point about the automated vacuum at the heart of Coke’s cynical anti-meanness push, we built a bot to tweet [Hitler’s autobiography] Mein Kampf through Coke’s automated positivity generator:

It has turned out fortunate for me to-day that destiny appointed Braunau-on-the-Inn to be my birthplace. 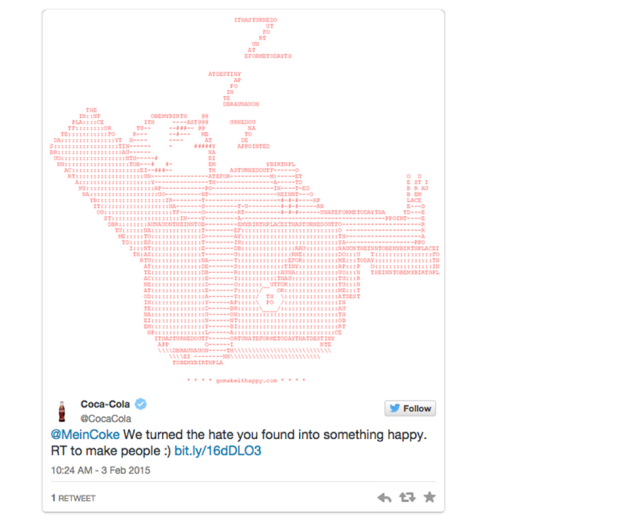 For that little town is situated just on the frontier between those two States the reunion of which seems, 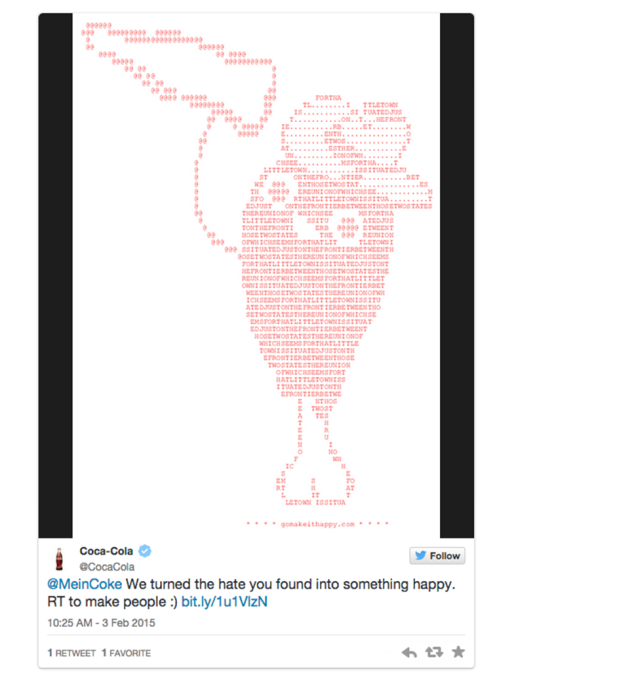 at least to us of the younger generation, 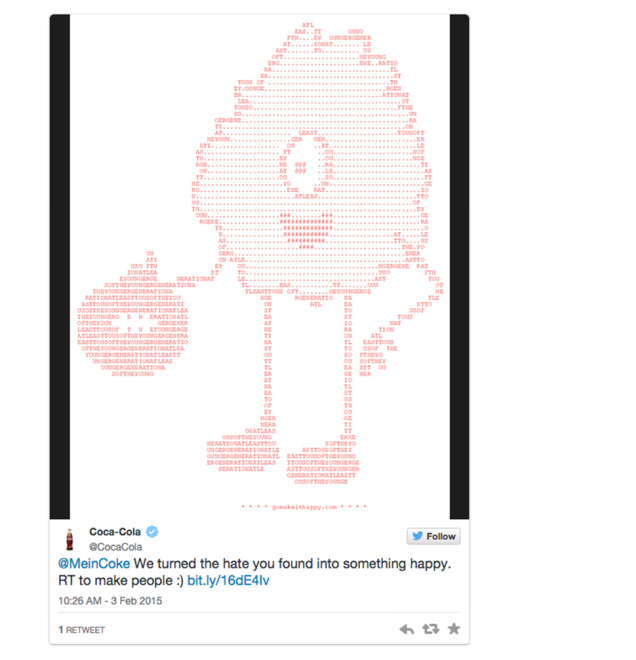 a task to which we should devote our lives and in the pursuit of which every possible means should be employed. 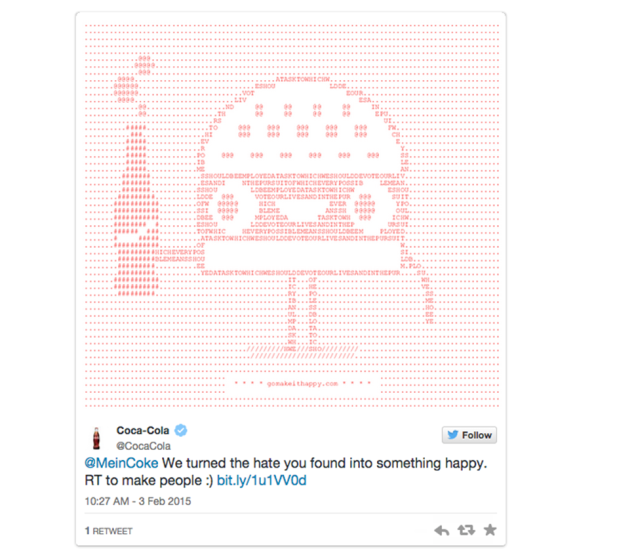 German-Austria must be restored to the great German Motherland. And not indeed on any grounds of economic calculation whatsoever. No, no. 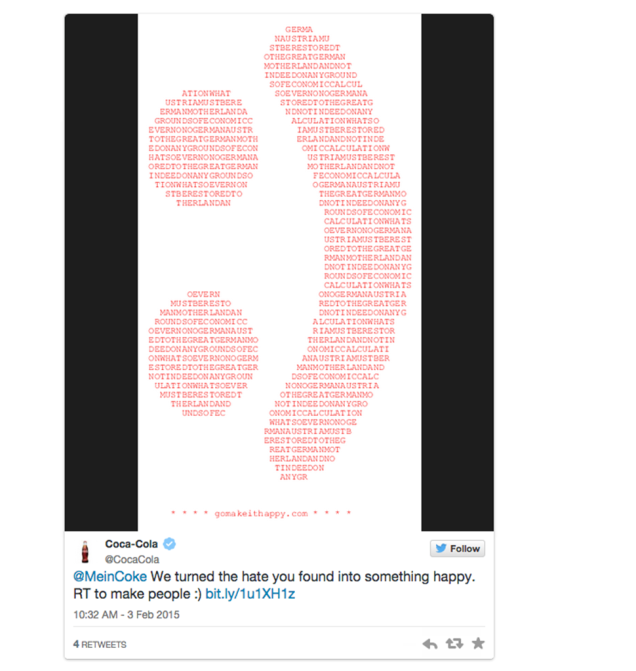 There’s more of these, but you get the idea.

“We assumed that the response to our little stunt would be largely apathetic,” Biddle writes:

Not only was our point obvious and slight, but in tweeting hateful sentiment at @CocaCola, we were doing exactly what the marketing campaign had asked us to do.

And then Coca-Cola, slow-witted and cowardly like all global megabrands, killed its bot, and suddenly countless people across the internet were aghast. We hadn’t thrown a tiny wrench into the slickly oiled workings of a $3 billion marketing operation, we’d embarrassed someone’s pal. Someone’s pal who was just trying to do some good online! We’d brought negativity into the positive sphere of Coke-swilling. For something totally devoid of humanity, Coca-Cola—a brutish company that condones slave labor and anti-union kidnapping and murder and whose CEO netted $30 million in 2012—was able to muster levels of smarmy cybertears not seen since Kony’s reign of terror with its Twitter stunt.

Coca-Cola's effort to clean up negativity on social media becomes the victim of a Gawker hate crime. http://t.co/Q5Ay9kQTjL

@Gawker, what the fuck? This is how you spend your time and resources? Disgusting and SHAMEFUL. Apologize to Coke and #MakeItHappy, dammit.

Actual flesh-and-blood humans felt bad for a corporation, in public. Real people poured the kind of empathy and anguish that’s historically been reserved for other real people upon a multinational conglomerate worth billions of dollars that sells liquid fructose poison and has a history of literally enslaving impoverished workers.

Human beings—including journalists—flocked to Coke’s side. The Verge sobbed that we’d “ruined” Coke’s “courage and optimism,” AdWeek called our work a “debacle,” and Coke itself feigned dismay: “It’s unfortunate Gawker made it a mission to break the system, and the content they used to do it is appalling.” “Have a Coke and a—frown,” bleated some dunce at USA Today. Coca Cola’s rough approximation of humanity had made an enormous impression, and its drinkers and friends took a stand. No more, they tweet-chanted in unison, no more unkind words for this maker of sweet liquid toxins.

“On Facebook, the button to ‘like’ a brand (like a brand!) is functionally identical to ‘liking’ another person.” Biddle writes. And more than 34 million people have “liked” Pepsi. “More than a million people have made a similar life decision with Mr. Clean, more than 300,000 people are Facebook friends with Jimmy Dean Sausages and Kleenex.” What has happened in the “friendification of corporate brands” is that advertising messages now co-exist in the same newsfeed, as “mom and bae and Brian from hockey practice.” News from brands and people we care about has blended into the same stream. And at this point, not only are there are a lot of people using social media who don’t really remember or relate to the time before this happened, there are a lot of brands using social media that are starting to forget, too.

Increasingly, the way brands (try) to sound is less and less like brands, and more and more…. like just actual people. 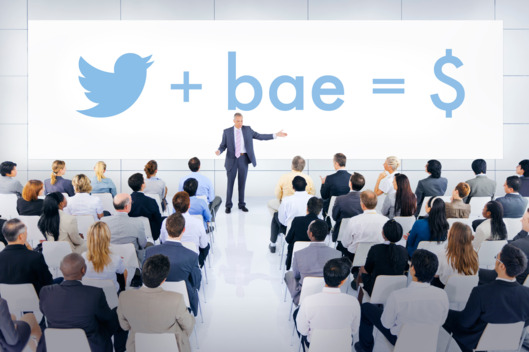 “This was [the] year of galumphing attempts of consumer brands to curry favor with #millennials on their #social networks with #memes designed to go #viral,” Annie Lowrey wrote in December in New York Magazine. “A new, horrible-brilliant Twitter account distills the trend down to its essence. It is called @BrandsSayingBae. It is comprised of brands tweeting the word bae or other trending neologisms. And it is, as the Verge puts it, just what “we’ve needed in 2014.”

This is why we get up in the morning. pic.twitter.com/NvnKaK0m8P

“You can almost hear the white-collar conversation leading to tweets like these if you listen closely enough,” Lowrey adds, patomiming: “’Jones, the youths have adopted new phraseology again! This time it’s bae. Pronounced like the Chesapeake, spelled like babe with one letter missing!’ Sometimes, the results of such corporate-think are really funny. [For example] Denny’s stoner-Dada Twitter account.”

The best Coachella look is french toast remnants all over yr face while not appropriating any other cultures.

PANCAKES ARE A FLAT CIRCLE.

q: how does santa take his coffee? a: like his gifts, in a huge cloth sack. it's really messy actually. someone buy the dude a travel mug.

Why are brands doing this? Lowery attempts to explain:

They [saw] lightning get captured in a bottle once, on the evening of February 3, 2013. The San Francisco 49ers and the Baltimore Ravens had just kicked off the second half of their Super Bowl matchup when a power outage hit the stadium. Fans went crazy on Twitter — had Beyoncé rocked the halftime show so hard that she blew a fuse? And a few canny companies capitalized on the mania, including Oreo:

Power out? No problem. pic.twitter.com/dnQ7pOgC

It was perfect — funny, sweet, timely, on-brand, apropos. It went viral, with a suit at Oreo’s parent company declaring that the tweet “not only shows the power of real-time engagement, but also the sheer importance of understanding the overall media ecosystem.”

It was perfect. It was also pointless.

Because, elsewhere in the Turing Olympics “Tinder Bots Have Evolved to Mimic the Girl Next Door,” as Steven Melendez explains, on Motherboard.

“It’s usually, ‘Hey, if you want to talk further, go to this link on this website, and you can see all my pictures there,’” Satnam Narang, a senior security response manager at Symantec who’s ​written about the phenomenon, told me.

But lately, many Tinder spammers’ approaches have grown subtler. They’ve migrated from lewd photos and explicit language to more plausible, girl-next-door-style pictures. And they’ve programmed their bots to try to mimic a normal conversation.

“Social media will always be an incongruous and gross place for brands to mingle, because a company does not have feelings. It will never love you,” Biddle writes.

But how far away is a point where….. we can’t tell the difference?

“Spend some time to make your bot more personal,” Melendez quotes a user named cygon from a marketing forum where spammers trade tips for steering clear of Tinder’s spam detection systems and not raising users’ suspicions. “Your conversions will skyrocket. Once a guy gets feels a little emotionally involved he will go above and beyond to get a date. Remember—most your leads/conversions will be from beta guys who are desperate to get their dicks wet.”

In a time when people think of themselves as objects more than ever before, our technology is creating objects that seem more humanoid than ever.

But how long will it take before branded social media experiences are created by programs overseen by linguists and mathematicians and programmers writing AI code? How long before a major tech vendor sells in an artificial intelligence operating system to Coke?

How long until people are actually having relationships like the one depicted in the movie Her… with brands?

Anyway, back to getting approval for that social media editorial calendar.