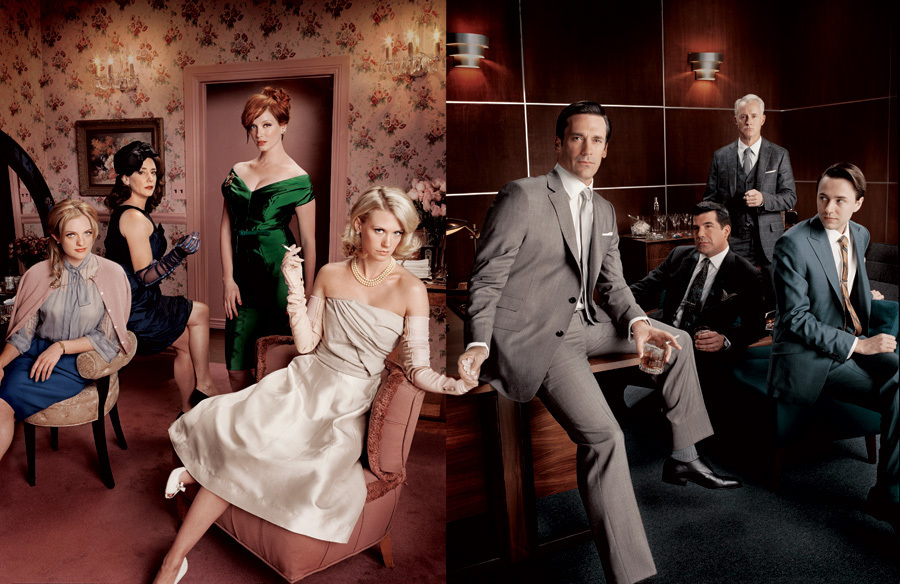 In college, we film students had a certain sense of disdain and smug superiority towards our TV-major classmates. Miramax, along with the whole independent film movement it was spearheading, had just hit it’s apex while we’d been in high school, and the late 90’s / early 2000’s saw the releases of such epics as The Matrix, American Beauty, Fight Club, Requiem For A Dream, and many, many more. Meanwhile the most relevant cultural content TV had managed to produce at the time were shows like Seinfeld, Friends, and Survivor. I remember being simply dumbfounded that anyone would want to major in TV at all. I mean, like, what for? The big screen is where the REALLY cutting-edge, fascinating, intelligent, and just plain COOL stuff was at.

Slowly, over the course of the decade, in sync with another major trend that has been gradually, and then suddenly, taking over our world, TV has changed. These days, there is such a slew of phenomenal output coming off the small screen, and conversely, a big fat quagmire of mediocrity projecting in theaters. TV is killing the movies.

Once upon a time, the studios reigned supreme. They bulldozed geniuses and turned out dreck, but in applying Henry Ford discipline and efficiencies to filmmaking they also gave us The Lady Eve, Casablanca, and Singin’ in the Rain. By the 1960s, however, the factory system began to give way, power shifted to directors and stars, and a new generation of independent-minded auteurs crafted sometimes indulgent but often original and even brilliant films such as Bonnie and Clyde, Midnight Cowboy, Taxi Driver, and Apocalypse Now. Then, another turn: studios got the upper hand back, or learned to share it grudgingly with a handful of superstars and A-list directors. But without the old assembly-line rigor the result has too often been big, bloated dreck, like the films of Michael Bay, or the gaseous Oscar bait that bubbles up every fall—the worst of all movie worlds.

But, ah, television. Its great accomplishment over the past decade has been to give us the best of all movie worlds, to meld personal filmmaking, or series-making, with something like the craft and discipline, the crank-’em-out urgency, of the old studio system. I’m thinking first and foremost of The Sopranos, which debuted in 1999 and sadly departed in 2007. This strange and entertaining series, as individual a work as anything by Hitchcock or Scorsese, was the creation of David Chase, and it paved the way for The Wire, Deadwood, Rescue Me, Damages, and its successor as the best drama on television, the equally strange and entertaining Mad Men, which launch[ed] its third season on AMC August 16.

I’ve got my own theory, tho, and it goes something like this: digital technology saved television. Not that it meant to. It just happened by accident. See, the shows of the 90’s and before were, by and large, episodic. Things basically stayed the same from episode to episode. The characters didn’t really change much. The storyline didn’t really go anywhere unexpected, and if it did, it would always manage to resolve the issue, and find its way back to the beginning by the end of each episode. Things like Ross and Rachel  getting together or breaking up or getting back together were EVENTS, reserved for seasonal ratings sweeps.

The new shows we all watch and love, however, are not episodic, they are serial. They typically start with a “previously on” montage. Episodes build on one another in a series, relationships grow, change happens — or perhaps it doesn’t, and that’s exactly where the tension comes from — characters makes life-altering decisions, or maybe we simply find out more about their back-stories, which lets us see their current predicament in a totally new light. Serial shows evolve. And up until this decade that used to scare the shit out of TV networks. Cuz that narrative evolution can quickly become confusing. Lost, as its name would suggest, is perhaps the extreme example of this kind of narrative disorientation. If you miss one episode, shit’s changed and you just have no  idea what’s going on anymore, which is off-putting, and might make you likely to switch the channel to something more familiar. Since greater audience retention means more commercial watchers and higher prices for ad slots, this sort of confusion-induced channel surfing is why TV execs generally wanted to avoid complicated serial content as much as possible.

And then digital technology came along. Technically, HBO was first, with its seminally serial Sporanos, as Handy mentioned, which they could get away with for the same reason they could get away with all their other controversial programming — on premium cable, the shows aren’t at the mercy of advertisers. Nowadays, between Hulu, Tivo, and DVDs, not to mention all the torrent sites for downloading shows, if you’re so inclined, it’s virtually impossible NOT to keep up with a show you really dig, on whatever schedule you prefer. It is absolutely no overstatement to say that these new digital tools have not only had a profound impact on the actual content of television, they’ve helped  release the latent art-form in the medium itself.

At its core Mad Men is a moving and sometimes profound meditation on the deceptive allure of surface, and on the deeper mysteries of identity. The dialogue is almost invariably witty, but the silences, of which there are many, speak loudest: Mad Men is a series in which an episode’s most memorable scene can be a single shot of a woman at the end of her day, rubbing the sore shoulder where a bra strap has been digging in. There’s really nothing else like it on television.

There isn’t even anything else like it in the theaters! And this leads me to another change that the new technologies have enabled in television. Because of the new, truly serial format (unlike, even, shows like Buffy, or the X-Files, that came before, which were still a mix of episodic and serial episodes per season), the new TV series story-arc has been extended exponentially. Every episode ends on a cliff-hanger. Nothing is settled. The through-line isn’t just 45 minutes (the duration of a typical hour-long episode, allowing for commercials), it’s now a full season long.

I asked David Carbonara, the show’s composer, about a lovely piece of music he used to score a small but key scene in the second-season opener (Episode 201, by the production’s accounting), in which Don, intoxicated for once by his wife, watches a mink-clad Betty descend a hotel’s grand staircase as she arrives for a night out in the city. This was Carbonara’s answer, by e-mail: “It’s a piece written by Nikolai Rimsky-Korsakov called ‘Song of India’ from his opera Sadko. Tommy Dorsey had a hit with an up-tempo version in 1937. Matthew Weiner [Mad Men’s meticulous creator and executive producer] wanted a harp in the hotel lobby to be playing the song, then have the arrangement become larger for scoring Betty’s entrance.… But my favorite use of ‘Song of India,’ and sadly I don’t think anyone noticed, was in episode 211, ‘The Jet Set.’ This time it’s played as a jazz samba in yet another hotel bar as Don thinks he sees Betty! It’s played as source music with a bit of score overlaid on top hopefully calling us back to the previous hotel lobby in episode 201 [which had aired 11 weeks earlier in the series’ initial run], when they were very much in love. I admit it was a bit subtle, but maybe (hopefully!) it had an effect in the viewer’s subconscious.”

There’s just no way a 90-minute movie can compete with something like this. There’s simply no opportunity for this kind of subtlety and nuance and atmosphere in the timing. It’s incomparable. Watching The Jet Set episode Carbonara mentions, in fact, at the very end, when the camera pulls back from Don’s arm, naked, outstretched over the back of the couch in a strange house in Palm Springs, I had a kind of epiphany about the show…. 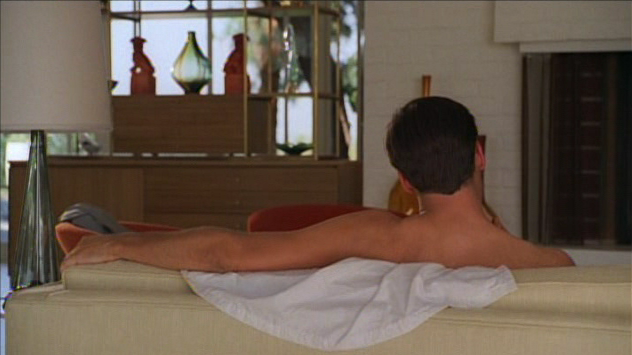 This shot is a direct mirror to the iconic Mad Men silhouette, from over Don’s other arm, shirt-clad, stretched over a couch in his New York, Sterling Cooper office….

With just this single, slow, meditative stroke the shot silently articulates everything you need to understand about the strangeness of this Californian mirrorland that our hero has found himself in, his own strangeness at being there, and how far removed and flipped around everything there is in contrast to his New York reality. Watching this almost subliminal storytelling layer that I’d previously known solely as an achievement of cinema, I suddenly realized that Mad Men had left TV show territory entirely. It had become almost mathematically perfect, a number multiplied by its reciprocal, always equaling 1. It had become a kind of poetry, where every single word and punctuation mark is critical to maintaining the meaning and integrity of the overall structure, which would otherwise collapse if even a single element were removed.

Sure, not every TV show is Mad Men, but there’s more and more shows edging closer. Some of my personal favorites:

Think about the last movie that you really loved. Was there even one this year? More than one?

Probably not. The economic downturn has screwed the movie industry. Studios’ profits have plummeted. DVD buying, which might have once helped salvage theatrical-release turds, is way down in North America, and in other markets is basically nonexistent due to piracy. With a lot less money coming in, and with production costs continuing to rise, studios are pouring more money into “branded entertainment”—movies based on franchises that have strong brand recognition and can, theoretically, provide a decent opening weekend, a la G.I. Joe. According to the LA Times, an adaptation of the board game Battleship is scheduled for release July 2011, the same month as a third “Transformers” film. Studios have even recently announced the development of new movies based on Monopoly, Clue, and Candy Land. Meanwhile, as traditional movie stars’ are becoming less and less reliable for drawing an audience, major studios are producing far fewer adult dramas, and the independent film world is slowly collapsing under the weight of the recession as well. Last year alone saw the dissolution of three major independent film companies. Time Warner closed Warner Independent Pictures (Little Miss Sunshine, Good Night and Good Luck), and Picturehouse Entertainment (The Women, Mongol), and Viacom closed Paramount Vantage (No Country For Old Men, There Will Be Blood). Things have gotten so whack, Paramount has even had to delay the Martin Scorsese-Leonardo DiCaprio thriller, Shutter Island, from October to February of next year because it couldn’t afford the necessary marketing budget that kind of vehicle requires.

It’s no surprise, then, that so many movie actors are working on the small screen. Once considered a fatal oblivion for movie stars, TV shows these days include titles like Alec Baldwin, Tim Roth, Lawrence Fishburne, Ron Perlman, Anna Paquin, Minnie Driver Eddie Izzard, Jonathan Rhys Myers, Keifer Sutherland, and those are just off the top of my head, but clearly, you’ve noticed this trend yourself. It’s pretty unmistakable. So this is where we find ourselves. Hulu is developing more of a brand online than the big broadcast networks that own shares of it, overtaking ABC, NBC and Fox in web traffic for the first time in June. 1 in 3 households owns a DVR (Digital Video Recorder), 33% in fact, up from 28% a year ago, adding significant numbers of time-shifted viewers to shows’ ratings — 36 shows now add 1 million or more viewers one to seven days after the original air-date. And as movies have sunk to the new low of board game franchise tie-ins, television has woken up out of its reality-TV coma and become the far more innovative, dynamic, and risk-taking medium.

Charlie Collier, president of AMC, quoted in the Vanity Fair article describes Matthew Weiner’s vision for Mad Men, which can be as easily applied to the current state of the tube in general: “It’s not television; it’s a world.”