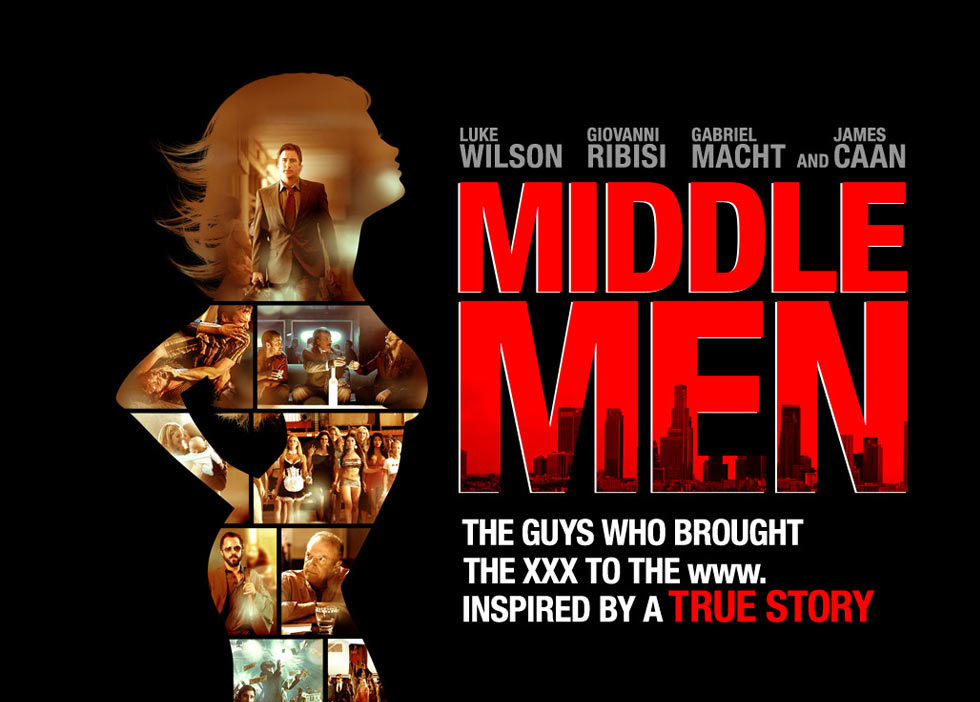 You know those movies about characters trail-blazing the business of some terrible vice? They’re always set in a not-too-distant past, have trailers full of period-specific songs, and include the words “inspired by a true story” on the poster. There’s the initial meteoric rise to power and wealth, followed by a period of unbridled excess — generally involving use of montage — and, ultimately, the inevitable downfall which was doomed to happen from the start, with, possibly, an epilogue of redemption. It’s a very specific film archetype, wherein the traditional bad guy is, instead, the quintessential American hero: the visionary entrepreneur who possesses the ingenuity and tenacity and just plain balls to seize an opportunity only he can see, and achieve a feat so stupendous — inventing the American cocaine trade, for instance, becoming the first black man to rise above the Italian mafia in the New York heroin business — you’re at once inspired and horrified by his success.

In 2001, Blow kicked off this trend of movies where you’re rooting for the drug dealer. The movie’s based on the life of George Jung, played by Johnny Depp, a Boston guy living in California, who starts off smuggling pot cross-country in the 60’s, and ends up becoming the American connection to Pablo Escobar’s Medellín Cartel, which, with Jung’s help, would go on to own 85% share of the U.S. cocaine market by the late 70’s / early 80’s:

.
Then came 2005’s Lord of War, in which the illicit contraband is weaponry, and Nicolas Cage plays Ukranian-American gun trafficker, Yuri Orlov — a fictional character based on a composite of a number of actual post-soviet arms dealers — whose big break comes as he watches Mikhail Gorbachev give his resignation speech on television, Christmas Day 1991. Like a prospector who’s just struck oil (See also: There Will Be Blood, for a variation on this cinematic theme), he envisions, in this moment, the future of his business expanding with the gush of weapons — even tanks! — he’ll now be able to buy (illegally) from the just-dissolved Soviet Union’s stockpile in the Ukraine:

.
2005 was also the year Weeds premiered on Showtime, in which Mary-Louise Parker plays a widowed housewife who becomes a suburban pot dealer, and a few seasons later ends up married to the head of a Mexican drug cartel.

By 2008, when American Gangster came out — which tells the story of Frank Lucas, played by Denzel Washington, who bypassed the entire Italian mafia to become the heroin king-pin of New York in the early 70’s by establishing his own direct supply connection in Asia during the Vietnam war and smuggling the drugs into the U.S. in the coffins of dead U.S. soldiers — rooting for the vice-peddling, psychotically enterprising, imminently doomed outlaw businessman — even though, good god! he’s a fucking heroin drug lord turning all of Harlem into addicted zombies!! — had become a familiar experience:

It’s 2010. 20 years since the first web browser, 15 years since the first adult materials became commercially available online, 10 years since the dot com bubble burst, 5 years since MySpace was getting more page-views than Google, a year since Facebook overtook MySpace in unique visitors, and meanwhile, Americans now spend, on average, about as much time on the Internet as watching TV. In fact, if you’re under the age of 45, you spend considerably more time on the Internet than watching TV. Amid a global financial crisis, US online retail managed to grow 11% in 2009 to reach $155.2 billion. Overall online sales are projected to increase almost 200% between 2008 and 2012. 75% of us use social network sites. And the time we spend there is growing at 3 times the overall Internet rate, accounting for 10% of all Internet time — every second of which, by the way, 28,258 internet users are viewing porn.

Hollywood is finally catching on. Up next after Middle Men is the film adaptation of Ben Mezrich’s 2009 book, The Accidental Billionaires: The Founding Of Facebook, A Tale of Sex, Money, Genius, and Betrayal. It comes out just a couple of weeks after Wall Street 2:

Here’s an excerpt from the book:

What neither he nor Mark [Zuckerberg, Facebook founder] had known when they started the damn thing was how addictive Facebook was. You didn’t just visit the site once. You vsited it every day. You came back gain and again, adding to your site, your profile, changing your pictures, your interestes, and most of all, updating your friends.

… Most kids who tried out [Facebook] once tended to come back  — 67 percent every day.

The Internet: It might not be illegal, but it’s unquestionably addictive.

Once considered the province of geeks, the Internet is now where all of us live. It is a huge, enormous thing that is changing how we do practically everything and permeating the very experience of our lives. It is now all of our’s vice. And it’s breeding a whole new generation of vice entrepreneurs. Drug dealers and gunrunners have new company.

In related news, is it just me or does the new poster for The Social Network seem, like, awfully familiar? 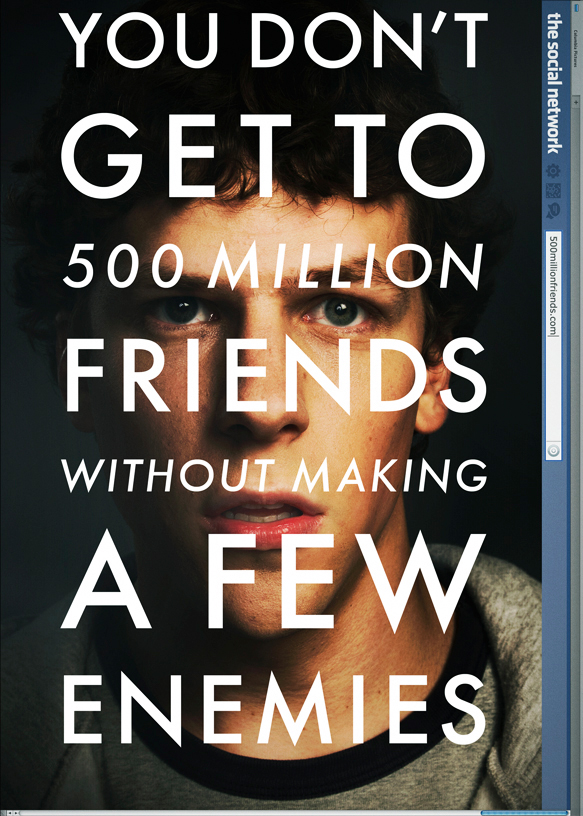 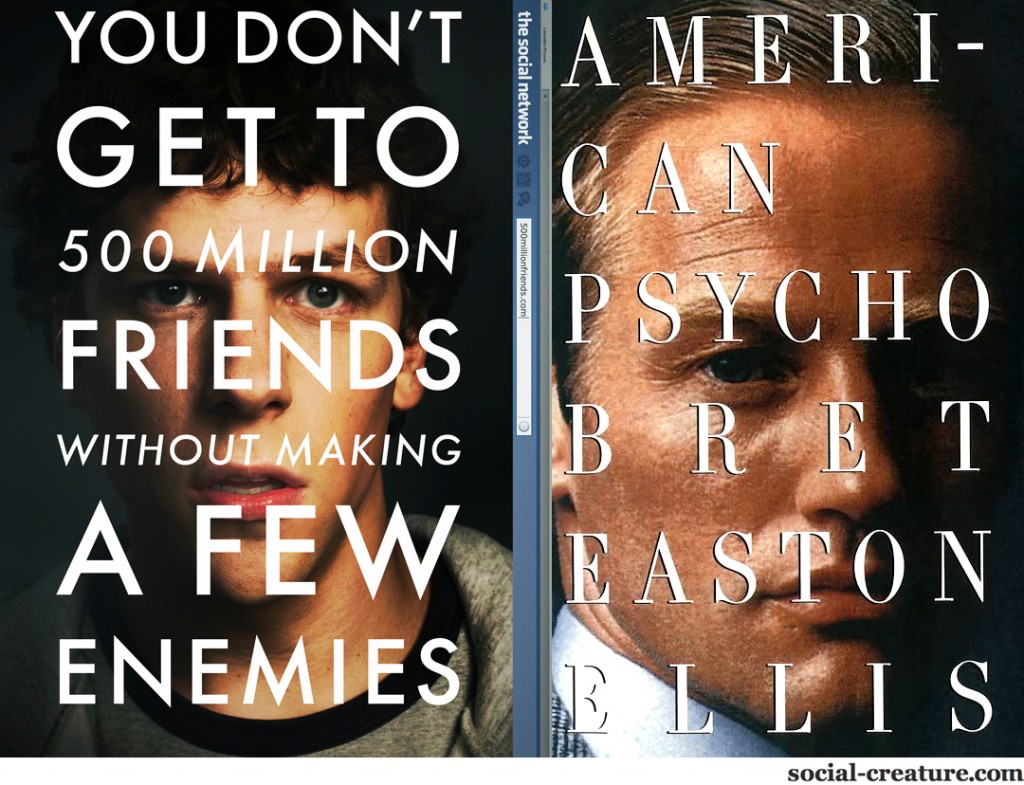