Just a quick post to let you know our new Google overlords must have officially arrived, according to this ad: 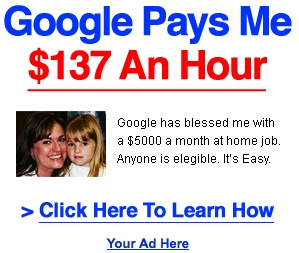 Taking over from the exiting party which has heretofore been responsible for bestowing the bless-age, and to whom all unanswered questions had previously been directed, the new ephemeral, universal, entity that apparently has $5,000-a-month jobs for ye that ask to receive, will forthwith be G-ogle.

Also, the Singularity is here.

You’ll be getting an email.

The use of religious language (particularly next to the image), was perhaps deliberately intended to appeal to consumers for whom religious faith is a big, defining aspect of their identity, and for whom this kind of  messaging could therefore make the ad specifically relevant. I don’t know what the statistics are on Christian stay-at-home moms, but I imagine the numbers would make this approach worthwhile.

(Ironically, if we’re gonna get biblical, the first Commandment is actually all about God insisting that there’s only one of him, and in case it wasn’t clear, Commandment #2 is basically, “and ye best not forget it.”)

Anyway… who’s got ideas for how we can rebrand Saturnalia…