Who here wants a colonoscopy?

If you don’t happen to know the details, a colonoscopy is an exam of the inner lining of your large intestine, which helps find ulcers, colon polyps, tumors, and areas of inflammation or bleeding.

Doesn’t that just make you want to run out and get one?

So, don’t everyone all jump up at once.

As a Sr. UX Designer at Athena Health one of the problems I’m working on is figuring out how to get patients to become more active and informed participants in their own healthcare. Colorectal cancer, for example, is one of the few kinds that can be prevented with screening, and early detection saves tens of thousands of lives per year. But you’d be hard pressed to find someone for whom it’s anything but the pressure of a doctor’s authority that wins out over personal aversion to getting one in the end. (Phrasing).

In consumer tech you operate under the assumption that people are going to luuurve your product. To get anyone else excited about what you’re working on, you have to drink your own kool-aid about how awesome and innovative and insanely great your photo app or fashion marketplace or brand activation or whatever is. (Don’t worry, I’m sure people want to use your product.)

But in the landscape of technology that actually matters to people’s health — a solution to surface targeted, preventative health services recommendations for patients, such as a colonoscopy, for example— you have to go in with a clear-eyed understanding of the reasons why people AREN’T going to love it.

UX is often about solving logic problems. How do you put the right elements in the right place to get people from point A to point B, and how to get them there faster? It’s a logistics issue. Make it simplified, more navigable, more intuitive, more efficient. But emotion is a peskily inescapable part of the human condition. It can’t be sanded off. No matter how frictionless the experience, the emotional aspects must be addressed on their own terms. In fact, emotions aren’t just the deterrents, they are also the drivers that can motivate us to point B in the first place.

So how do we create UX solutions to mitigate these road blocks and leverage emotional drivers that can help reinvent experiences people would rather avoid?

“People are already forced to spend thousands of dollars a year on medical care and health insurance anyway — so why not reframe it as a lifestyle product?”

What makes lifestyle such a compelling driver is that it appeals directly to our sense of who we are. We do the things and buy the things and use the things that are congruent with our personal identity and communicate our identity choices to others.

If lifestyle forces could transform a medical device that sits on your nose and obscures your face into a hipster fashion accessory, is there opportunity to do the same for other healthcare experiences?

Dave Sanders, a Portland Oregon-based M.D., co-founded a network of walk-in clinics called Zoomcare to do exactly that.

It sounds like hooey, but it wouldn’t be the first time that savvy product design has transformed a boring service into an object of desire. The Nest thermostat,Tesla Powerwall home battery, and Google OnHub Wi-Fi router are all placing similar bets. Oscar is already trying to give health insurance a design facelift.

“Health care is one of the largest household spending categories other than a car or food,” Sanders says. “For that kind of investment, it needs to be a life-enhancing platform, not just a commodity or a utility. Oh, and by the way, when you’re really sick, it’s got your back too.”

“Cake is the easiest way to discover, share, and store your end of life preferences.”

Cake is a Boston-based startup tackling preparation for the most dreaded life-stage of all—death.

How do you want to be remembered? Would you rather live as long as possible or prioritize quality of life? Have you made financial plans? Just thinking about our own mortality is terrifying already, but the exceedingly complicated and fragmented current state of end-of-life planning makes the whole process not just odious but tedious.

The Cake team believes it should be easier, and to that end have created an app that aims to make end-of-life planning “a piece of cake.” Users are able to fill out “Cake Cards” that ask key questions to quickly illuminate personal values and priorities, both to themselves and their loved ones. Users can simply agree or disagree with the option on each card and go through as many cards as they feel like. If this approach feels lullingly familiar, it’s by design. By repositioning a universally daunting process through the lens of preference-setting (and, oh, hey, the familiar, binary choice UI of Tinder actually put to use for good) Cake’s approach creates a sense of agency and empowerment in an experience otherwise literally defined by our mortal limitations.

“Of those who did the mindfulness training, 43.6 percent reported a meaningful reduction in pain 26 weeks later. That’s compared to 26.6 percent in the usual care group. ”

— For Chronic Low Back Pain, Mindfulness Can Beat Painkillers (NPR)

Since Jonathan Kabat Zinn’s seminal research in the 1980s on The clinical use of mindfulness meditation for the self-regulation of chronic pain, mindfulness practices have been slowly gaining traction as a viable method for pain reduction. More recently, the growing focus on mindfulness as a means for mitigating the psychological jungle warfare of Western life has served to further promote its uses in Western medicine.

Earlier this year The Journal of the American Medical Association endorsed mindfulness meditation as a treatment for chronic pain, and an alternative to the relentless tide of pain-killer prescriptions that have helped fuel a full on epidemic of opioid addiction.

Mindfulness meditation cultivates a different relationship to our experiences, identifying, labeling, and discerning sensations — pleasant, unpleasant , or neutral— rather than blindly reacting to them. This practice helps to modulate the nature and orientation of our attention toward pain, and our corresponding emotional response, which can reduce its impact.

Last year an app I designed for a physical therapy technology client allowed patients to rate and provide feedback on how painful or difficult their prescribed exercises and stretches were to complete. The approach aimed to encourage greater body awareness and mindfulness to support the PT treatment regimen, but it has application beyond rehabilitation. Especially for the nascent space of wearables and fitness technologies, incorporating mindfulness features can support a greater overall physical and psychological well-being that these devices can help their users achieve.

“It’s knowing ‘hey, there’s thousands of people who are experiencing this exact thing.’ I just feel less alone because of the online community.”

— How Tumblr Became a Source for Mental Health Care (The Guardian)

Normalizing stigmatized or alienating experiences has been the lynchpin of support groups since their inception. Even informal groups can have significant impact. “Research suggests that when you put people in a cancer treatment together, their experience and hope for the next treatment improves because it’s a support network,” says Michael Pukszta, leader of CannonDesign, which recently redesigned the M Health clinic and surgery center at the University of Minnesota along such design principles.

One of the redeeming aspects of social technology is, in fact, its capacity to connect us with others who understand and relate to our experiences. Mea Pearson, a 24-year-old with borderline personality disorder, went to Tumblr seeking advice after her diagnosis, and ended up starting her own blog, shitborderlinesdo, to create a more positive and nuanced online depiction of her illness. Today, her Tumblr blog has nearly 20,000 daily visitors.

Embracing its growing popularity as a mental health support forum, Tumblr has gone so far as to create dedicated experiences for people searching for a word such as depression. “Is Everything Okay?” reads a message, with links to crisis intervention programs. 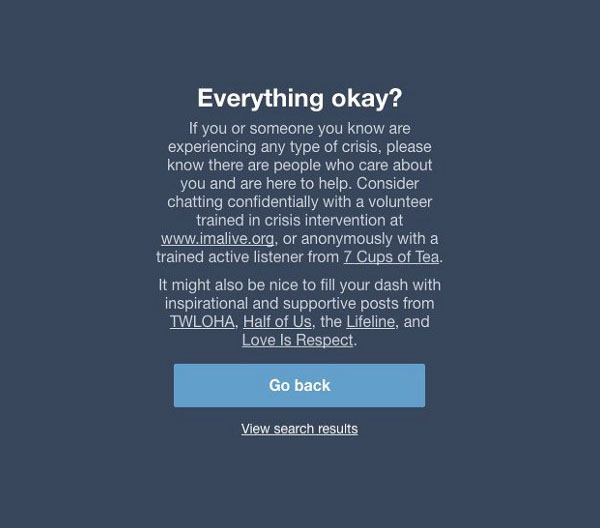 But perhaps the most beneficial part of what the platform can offer is a community for people experiencing illness to realize that there are others going through the same things they are, reducing the shame and fear of suffering in isolation.

Building for features that enable normalization has even led Patients Like Me to completely reimagine what crowdsourcing technology can do when married with healthcare. The Boston-based company began as a support destination where people could compare treatments, symptoms, and experiences. With this vast amount of self-reporting from actual patients, it has evolved into a health data platform that seeks to transform the way the medical industry conducts research and develops treatments to improve patient care.

“70% of the participants who sent weekly updates to a friend reported successful goal achievement, compared to 35% of those who kept their goals to themselves.”

While telling people your goals might actually lull you into a sense of complacency, sharing your progress — the fruits of your dogged determination in pursuit of said goal — may make you more likely to actually accomplish it. According to The American Psychological Association, “If you are trying to achieve a goal, the more often that you monitor your progress, the greater the likelihood that you will succeed. Your chances of success are even more likely if you report your progress publicly or physically record it.”

This is a technique that’s been applied for weight loss and fitness products for ages. Weilos, a social media platform for people to talk about their weight loss and fitness goals and share selfies of their progress, found that users who posted progress photos documenting their weight loss lost .93 lbs. more per week, compared to when they didn’t use the sharing platform. Complete, an iOS app that allows users to share their to-do lists with a community found in their first 5 months that those who publicly declared their intentions on the network were four times more likely to complete their tasks.

Building features to support and encourage this kind of social accountability could have significant implications when it comes to medication adherence and, ultimately, outcomes. Consider how much more motivated patients may be to close the gaps in their preventative health if their family members and loved ones had visibility into their progress.

“They’re real … and they’re either hilarious or disturbing, depending on your sensibilities. At the very least, we think you’ll agree this video is more effective than any peeling doctor’s office poster.”

Laughter may be the best medicine and prevention the best cure, so Argentinian Breast Cancer charity, MACMA, and creative agency DAVID, decided to put these two, time-tested remedies together in their recently released breast cancer awareness PSA.

“Women’s boobs, particularly their nipples, are censored in certain social networks,” a voiceover says as a woman unbuttons her shirt. “Even when showing how to perform breast self-examinations to detect early breast cancer — ”

In steps a nude, male torso with a pair of “manboobs.” The woman proceeds to demonstrate how to perform a breast self exam on this stand-in, like a sex-ed teacher using a banana.

The initiative cheekily upends anatomy taboos — for both male and female bodies — while promoting preventative health through humor and irreverence.