In Nation of Rebels: Why Counterculture Became Consumer Culture, Joseph Heath and Andrew Potter explain that really, there was never any conflict between the two to begin with. Counterculture hinges on, and consumer culture consists of, the expression of your lifestyle/identity. Whether you’re choosing to wear Nikes, Doc Martens, or some crazy obscure Japanese brand that doesn’t even exist in the US, you’re deliberately saying something about yourself with the fashion choice. And regardless of how “counter” whatever culture you think you are, getting to express that about yourself requires buying something.

Yet the concept of a strict divide between the “mainstream” and “counter”–or “alternative”–cultures persists, and the distinction between these “affiliations” is now defined not by whether we consume, but by what. Identities hinge on particular expressions and symbols, such as music or fashion for instance. In a very simple sense, you are “mainstream” or “alternative” based on whether the way you choose to express your identity, your taste, is shared by a big group/culture, or a small one. Yet the trouble is that these expressions are given meaning precisely through their common significance within a group, if the group size changes, then so too does the meaning.

One way to think about remix is as the production of a new artifact through the artistic interweaving of other artifacts…. With this in mind, think about an average MySpace profile. What should come to mind is a multimedia collage: music, videos, images, text, etc. This collage is created through a practice known as “copy/paste” where teens (and adults) copy layout codes that they find on the web and paste it into the right place in the right forms to produce a profile collage. One can easily argue that this is remix: a remix of multimedia to produce a digital representation of self. Yet, the difference between this and say a hip-hop track is that the producer of a MySpace typically does not “hold” the content that they are using. Inevitably, the “img src=” code points to an image hosted by someone somewhere on the web; rarely is that owner the person posting said code to MySpace. The profile artist is remixing pointers, not content.

I kind of think of all culture creation/expression as a process of “Pointer Remix”— and when I say culture creation, I mean brand creation too. There’s a paragraph in Pattern Recognition where William Gibson lapses into fashion historian momentarily:

My God, don’t they know? This stuff is simulacra of simulacra of simulacra. A diluted tincture of Ralph Lauren, who had himself diluted the glory days of Brooks Brothers, who themselves had stepped on the product of Jermyn Street and Savile Row, flavoring their ready-to-wear with liberal lashings of polo knit and regimental stripes. But Tommy surely is the null point, the black hole. There must be some Tommy Hilfiger event horizon, beyond which it is impossible to be more derivative, more removed from the source, more devoid of soul.

And just as much as all labels are creating pointers, that’s exactly what we are buying. In fact, looking TO buy. Now, more than ever before, the possession of an “original” source is either impossible, pointless, or even irrelevant. In postmodernism’s revenge, even an “original” becomes a reference. A vintage dress is all about what it “points” to.

Yet as Boyd points out:

One of the most high profile cases of such content replacement came from John McCain’s run-in with MySpace profile creation. His staff failed to use images from their own servers. When the owner of the image McCain used realized that the bandwidth hog was McCain, he decided to replace the image. All of a sudden, McCain’s MySpace profile informed supporters that he was going to support gay marriage. Needless to say, this got cleaned up pretty fast.

Cleaning it up on myspace is easy. You can just go and find another image and use that, or, of course, you can host your own images, and that way be sure that the content being pointed to will not change without you knowing about it–but that defeats this metaphor, so pretend you didn’t just read it.

Cause what’s interesting to me is when this same phenomenon happens in a non-html-based context. Like, for example, if a priest gets outed as a pedophile. This kind of “content change” happens to real-life “pointers” all the time. Pointers that happen to be used as elements in the construction of identity.

Check this out, below is the ad campaign for the 2008 season of America’s Next Top Model: 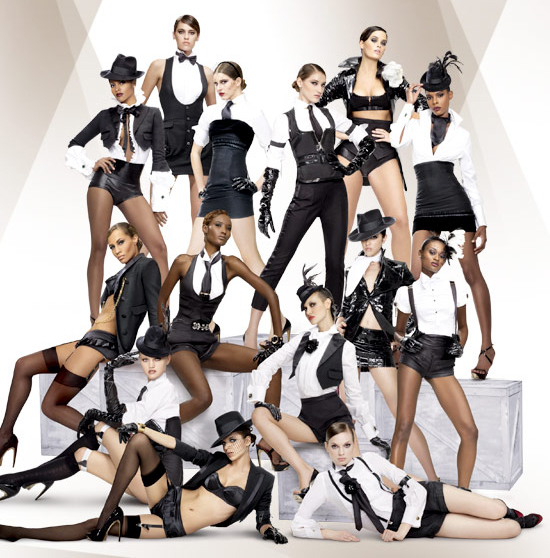 (For the record, seeing this billboard is what inspired this whole post.)

There’s a few particular aesthetic elements to note here for the purpose at hand, and I’ll tell you what they are. The hats with the feathers, the general 1920’s and 40’s infusion with the high waists and cropped tops, and the whole cabaret/vaudeville overtone.

These are all elements of a style that’s been rocked in the scene around me for years.

If you’re interested in some history you might want to click here, but the quick version is it became a part of the aesthetic expression of a particular subculture with a significant presence all up along the West Coast. And then last week, at the intersection of Sunset and Vine a bus rolls past me carrying a whole tableau along its side of girls sporting this style. It was pretty startling to see it so out of context, since up until then I hadn’t seen this look used in any mainstream media or setting–anyone who can find links to other examples, post it in the comments, I’d love to see it.

While I personally have no idea exactly how the stylist team for ANTM got the idea for the particular creative direction in the ad, I think the possibility that this burgeoning aesthetic, with a major base of operations in LA, might have somehow made it directly onto their radar is hardly a long shot.

Boyd asks, “What happens when a culture exists that rests on pointer remix for identity construction?” Well, at least one side effect is that meanings of cultural expressions–and hence what they say about our identities–change.

One pretty consistent way this “content change” in the meaning of a cultural expression happens is in the process of becoming more exposed. It’s been going on ever since the first small local band blew up and became huge. Everything else about the music and the act might have stayed the same but the obscurity, and it’s the very “alternative”-ness itself that was a part of its meaning all along. The difference between being a fan of something intimate and distinctive vs. something mainstream and egalitarian could be kinda like waking up to discover your kitten pictures have turned into kitten poo.

Here’s another approach. In October of 2007, Sasha Frere-Jones wrote an article in the New Yorker about “How Indie Rock Lost Its Soul.” The premise of the piece is that in the 1990’s rock and roll, a genre that evolved out of a tremendous black musical influence on white performers, and became the most miscegenated popular music ever to have existed, underwent a kind of racial re-segregation in its style:

Why did so many white rock bands retreat from the ecstatic singing and intense, voicelike guitar tones of the blues, the heavy African downbeat, and the elaborate showmanship that characterized black music of the mid-twentieth century? These are the volatile elements that launched rock and roll, in the nineteen-fifties, when Elvis Presley stole the world away from Pat Boone and moved popular music from the head to the hips.

…It’s difficult to talk about the racial pedigree of American pop music without being accused of reductionism, essentialism, or worse, and such suspicion is often warranted. In the case of many popular genres, the respective contributions of white and black musical traditions are nearly impossible to measure. In the nineteen-twenties, folk music was being recorded for the first time, and it was not always clear where the songs—passed from generation to generation and place to place—had come from.

…Yet there are also moments in the history of pop music when it’s not difficult to figure out whose chocolate got in whose peanut butter. In 1960, on a train between Dartford and London, Mick Jagger and Keith Richards, then teen-agers, bonded over a shared affinity for obscure blues records. (Jagger lent Richards an LP by Muddy Waters.) “Twist and Shout,” a song that will forever be associated with the Beatles, is in fact a fairly faithful rendition of a 1962 R. & B. cover by the Isley Brothers. In sum, as has been widely noted, the music that inspired some of the most commercially successful rock bands of the sixties and seventies—among them Led Zeppelin, Cream, and Grand Funk Railroad—was American blues and soul.

… In the mid- and late eighties, as MTV began granting equal airtime to videos by black musicians, academia was developing a doctrine of racial sensitivity that also had a sobering effect on white musicians: political correctness. Dabbling in black song forms, new or old, could now be seen as an act of appropriation, minstrelsy, or co-optation. A political reading of art took root, ending an age of innocent—or, at least, guilt-free—pilfering.

Himself a white musician/vocalist, Frere-Jones notes that adopting a black singing style even in his own band “seemed insulting.”

By the mid-nineties black influences had begun to recede, sometimes drastically, and the term “indie rock” came implicitly to mean white rock.

….How did rhythm come to be discounted in an art form that was born as a celebration of rhythm’s possibilities? Where is the impulse to reach out to an audience—to entertain? I can imagine James Brown writing dull material. I can even imagine the Meters wearing out their fans by playing a little too long. But I can’t imagine any of these musicians retreating inward and settling for the lassitude and monotony that so many indie acts seem to confuse with authenticity and significance.

While the article is specifically focused on the indie rock side, he readily admits that the segregation went both ways. Just as indie rock became “white rock,” “Black” music too began to occupy a space that may be more inaccessible and irrelevant to an outside audience now than it was during the 50’s. In an audio interview accompanying the article, Frere-Jones talks more about the results of the musical re-segregation from both angles. “Why is this a hit?” He jokes, about the absurdity of “Soulja Boy’s” success. “It’s just rapping over a ring-tone.”

Social and (after a series of lawsuits involving sampling) legislative forces gradually changed the sound of the music itself, and also of the “content” in the meaning of these musical pointers. As in: what does liking Indie Rock or Rock and Roll, and even Hip Hop at this point, convey about your identity now vs. what it would have 20 year ago? 40 years ago? Lose miscegenation and something that could once be relevant to a mixed audience becomes divisive.

Just as “Nation of Rebels” points out that there is no conflict between the counter and over-the-counter culture, I likewise see alternative and mainstream culture as just parts of a greater continuum, which ultimately, despite all the obstacles that societies, politics, economics, religions, and even individual personalities may put in its path, seeks its level at the greatest hybridity. “Content change” in the meaning of its expressions is as inevitable as the remixing of the expressions themselves.

In the meantime though, I’m gonna enjoy this kitten while it lasts.